Every Sunday, I meet some friends at a bar in Boerum Hill for pub trivia. I’ve gone regularly for about two years; I think it’s a good way to transition from the weekend to the workweek. On a beautiful evening, the bar is a nice twenty minute stroll away, on a quiet street lined by trees and brownstones. If it’s cold or raining, it’s a slog. So when the weather’s bad, I take the bus.

That is, if I don’t miss it. The bus is scheduled to come only every 30 minutes on Sunday evenings. It sometimes runs early, sometimes quite late and occasionally it’s so off-schedule I can’t tell if it’s early or late. With this bus frequency, missing the bus can be a real pain.

So I built bigappleserialbus, a machine-learning-based hardware bus notifier that uses little lights to tell me when to get ready to go and when to run out the door to catch the bus. I can tell literally at a glance if my bus is close. When it’s time to get ready, the green light for that route goes on. Time to go, red light.

In April 2014, New York’s MTA launched the bustime system to provide real-time bus location information. The most heavily-publicized piece of this system is a decent mobile and SMS app but checking my phone or a computer every few minutes when it’s time to leave to see when to catch the bus is a pain. Luckily, it also has an API, which bigappleserialbus uses to track bus locations on the four routes near my house (one for the bar, one for Trader Joe’s, one for Williamsburg, etc.).

Using that API, the bigappleserialbus system keeps track of each bus that’s on its way to my stop and stores in a database a list of each time the bus arrives at a stop before mine. It uses the k-means machine learning algorithm to predict, based on the past saved trajectories, to predict when the next bus will arrive at my stop. The fundamental assumption of this algorithm is that bus trips that took the a certain amount of time to travel the first handful of segments of the route will take a similar (to each other) amount of time to travel the rest – maybe because of similar weather, traffic conditions or number of passengers wanting to take the bus. Because new bus trajectories get added to the database each day, the system gets better and better at prediction.

Of course, it can’t be right all the time. If there’s a traffic accident two blocks up today, there’s no way for the system to know this — because that accident didn’t exist for the similar, past bus trips that today’s trip is being compared to.

The ambient notifications component of Big Apple Serial Bus is a first draft of an important design consideration for the “internet of things”. Too many devices beep to get their user’s attention, making the tool useless – we’ve all had the experience of hearing an occasional beep and wondering if it’s coming from the smoke alarm or the microwave or the dishwasher or the washing machine or the refrigerator… This sort of distracting, audible notification only makes sense for truly time-sensitive events, like a phone call or an open refrigerator door. Events that only sometimes require immediate action, like the Big apple Serial Bus, have to be less obtrusive, but still easily legible. The lights accomplish this: they’re not distracting when I don’t care, and when I do, they’re easy to interpret.

A better version of this tool would not require the user to memorize a list of bus routes from left to right, perhaps by having cutouts of the route names that light up. I don’t have that kind of machining skill though.

I want this to be available to other people, so please let me know if you’re interested. I want to hear from you. Right now, you need some very basic hardware hacking experience (really basic, like putting wires in a breadboard; no soldering), Python installation skills and at least some comfort editing config files. The full instructions are here. 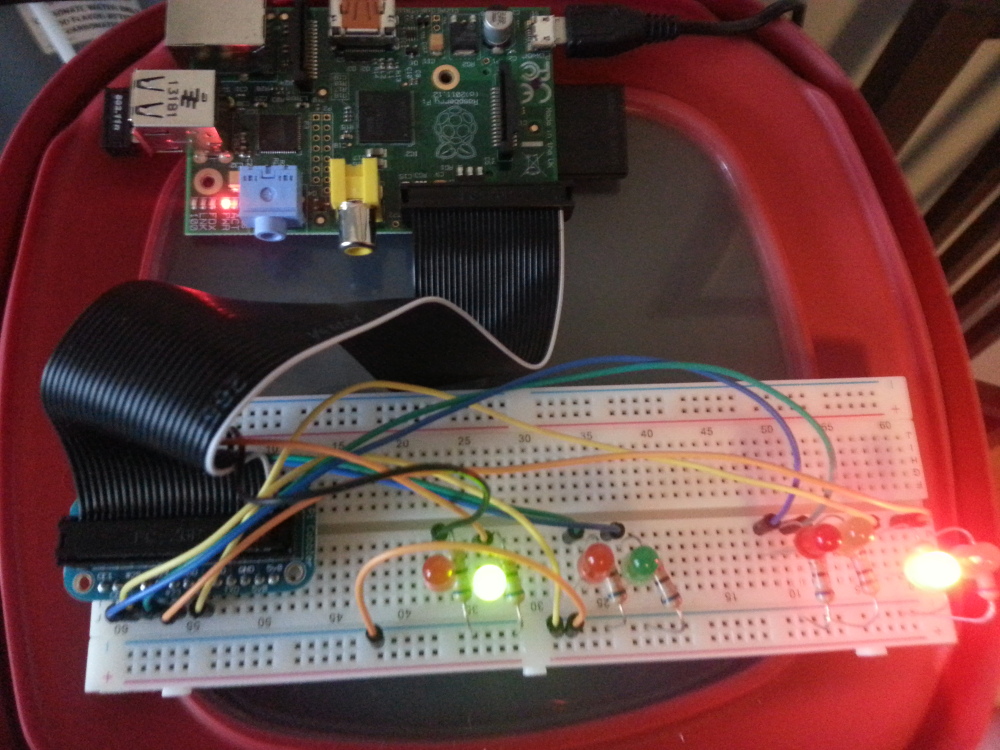 I’ve been thinking about a web interface for initial setup: a place to tell Big Apple Serial Bus which bus routes you care about and what stop is nearest to your apartment. If other cities use the same SIRI format, that could be supported too.